Sermon audio may be found here.

When I was growing up, I stayed at my grandmother’s house quite a bit. She was a Roman Catholic of the old type – there were paintings of the Last Supper and of Mary around the house. There were copies of religious tracts around and she had pictures of Jesus with children, of Jesus with his disciples, of Jesus doing all manner of things – surfing and snowboarding I think.
What I remember most though about the décor was the crucifixes everywhere. In every room there was a least one and usually more than that. Her theory was that no matter where you looked you should see a crucifix and be reminded of the Passion of Christ. This may explain my fondness for Lent. 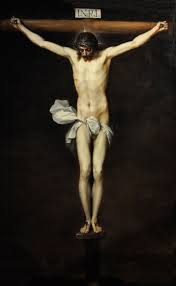 After a while though, each of those images of the crucifixion blended together – you just didn’t see them anymore because there were so many. Jesus’s suffering became a kind of generic wallpaper and the overwhelming power of God’s self-offering was lost in the clutter of the repetitiveness of the image.
As I sat down to finish my sermon for today, I had all of my notes in order, a sermon full of sound teaching and theological rigor was just about ready to print. I took a short break and opened my Facebook page and there, at the top of the page, was the following headline, “San Bernadino gunman shoots 20 people.”
This, of course, comes on the heels of the shootings in Colorado Springs which came just after the Paris attacks which happened after the downing of a Russian jetliner and the attacks in Nigeria and Mali.
On and on the news seems to go. One day follows another and one mass tragedy follows another.
These tragedies, one after the other, have become part of the wallpaper of our society. Those many images of the crucifixion in my grandmother’s house did not lose their power because of their ubiquity. The crucifixion never loses its power.
It was just so common that I was no longer shocked by it.
Now, as daily tragedies unfold, I wonder if we are losing our ability to be shocked – to be horrified – by the violence of the day.
It has become so common that it is the macabre Muzak of our culture – the background noise of a nation at play that is too distracted to be shocked and too stimulated to be aroused by daily horror.
Over the last 1,004 days there have been 994 mass shootings in America. Repeat. There have been more mass shootings in the United States this year than there have been days in the year.
A mass shooting is defined as four or more people shot in one incident. 994 mass shootings in 1,004 days resulting in 1,260 deaths and 3,606 injuries. This is all according to the Mass Shooter Tracking website – that such a site exists is an indictment of our whole culture.
This does not count the general level of gun violence in this country. So far this year, guns have claimed 12,183 lives. 24,654 people have been injured.
The crosses are hanging all around us now – bodies broken, lives taken, and dreams shattered. This is not an exercise in statistics. Each of those numbered from the first to the twelve thousand one hundred and eighty third is a beloved child of God.

What number would Jesus find acceptable?  When would there be one too many for Jesus?
Perhaps Shannon Johnson, who died protecting Denise Paraza in San Bernadino would have been one too many?
Perhaps Nicholas Thalasinos, who just renewed his wedding vows with his wife Jennifer would have been one too many?
Perhaps Bennetta Bet-Badal who fled Iran in the face of religious extremism only to be killed in San Bernadino – perhaps one too many?
Perhaps Garrett Swasey, a campus police officer, who arrived early on the scene in Colorado Springs. Perhaps Victoria Soto or Anne Marie Murphy who both died saving children at Sandy Hook elementary. Or perhaps one of the twelve girls or eight boys murdered there.
Which one of them would have been one too many for Jesus? When would he have said, “Enough?”
It would be easy to look away – to believe that we, like Pontius Pilate, are not guilty because we do not do the deeds ourselves.
I’m not a politician – I don’t know the political answer. I’m not a law enforcement official – I don’t know the enforcement answer. I’m not a mental health professional – I don’t know the psychological answer.

But I am a Christian. I am baptized. And I know this – there is no collateral damage in the loving embrace of God – God counts none as dispensable thus he sent a son who would be a ransom for a captive world – for a lost and sinful people.
This Advent we wait. We wonder at the coming of Christ.
The first line of our first reading today could not be more appropriate as the prophet Baruch cries out, “Take off the garment of your sorrow and affliction, O Jerusalem, and put on for ever the beauty of the glory from God.”
Sorrow and affliction have staked their claim on us in the midst of so many tragedies. Yet we look with longing eyes toward the beauty of the glory of God revealed under a star in a manger.
Facing the chaos and rage of a fumbling creation – Christ enters not taking up arms to defeat the enemy but lying in the arms of his mother disarming hatred with love. Undoing anger with mercy. Releasing the hold of death by triumphing over the grave.
The way to the revelation of the glory of God was paved by the call to repentance as John the Baptist cried out in the wilderness. The path was being made straight and the rough ways made smooth as John called the people of God to follow him so that all might see the salvation of God.
He called those who would know God to repent and to be baptized into new life. We have pledged ourselves to this work of repentance and reparation. The coming of Christ among us was not only an act by which the Son of God looked like humanity – but an act by which humanity might more closely resemble the Son of God.
This is the heart of baptism – that we become children of God and heirs to the promises of Christ and are welcomed into his ministry.
In our baptism we promise a number of things.
We promise first to renounce Satan and all the spiritual forces of wickedness which rebel against God. We promise next to renounce the evil powers of this world which corrupt and destroy the creatures of God. We also promise to strive for justice and peace – to persevere in resisting evil, and to repent and return to the Lord.
Now is a time when we must renounce Satan – when we can say with boldness that the violence which is destroying the beloved of God is a work of the Devil.
Justice and peace are not soft words that we use to indicate the mildness of a baby in a manger – they are God’s claims upon the hearts of the faithful, the children of God, that we might have the courage to stand firm even as the Devil marches toward us as remember our promises, when we said over and over again, “I will with God’s help.”
It is with God’s help that we are called to name, renounce, and reject the works of the Devil – to stand firm in love.
At a funeral this past Friday, I listened to a reading from Romans which read, “I consider that the sufferings of this present time are not worth comparing with the glory about to be revealed to us. For the creation waits with eager longing for the revealing of the children of God.”
The Creation waits with eager longing looking for the children of God to stand up – to let the glory of Christ shine forth in our lives and witness.
This is Advent – a season of waiting. We wait. Our communities wait. Our states wait. Our nation waits. Those who weep, those who mourn, and those who fear wait for they have had enough. Enough of blood. Enough of tears. Enough of Death. Enough.
Advent is here. It is a season of waiting. We wait for God to take action for the healing of the world – we wait for God to say, “Enough!”
God is waiting for us to as well. He is waiting for us to say, “Enough.” He too is waiting for the revealing of the children of God. He knows that this is Advent – and He waits.

4 thoughts on “Waiting on God: Advent and Violence”