I saw a note this morning that was related to the Real Presence of Christ and our own need to know Christ not as called into our midst but ourselves as entering the reality of the presence of Christ.  I am beginning to think that the real challenge for myself and the Church more broadly is allowing ourselves to believe in Real Absence – in the actual setting aside of our own needs, distractions, agendas, and longings for a moment or two as we know ourselves in the Presence.

Last night, I celebrated a mass quite different from ones I have celebrated in the past.  It was west-facing first (which still throws me off), very contemporary language, a loaf of bread, music as far from Bairstow and Byrd as you can imagine.  So the challenge I found myself facing was not so much cultural or experiential one – though it was both – but the challenge of letting myself get out of the way a bit so that Christ could make himself known in this way that was strange to me but was obviously meaningful to so many. 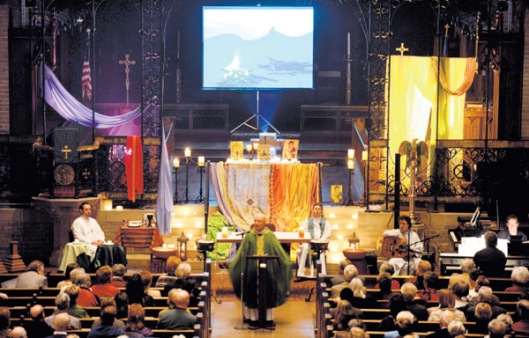 As a Church we often occupy ourselves with one thing or another – right now we are talking about reorganization and renewal.  Yet I wonder if we could profitably spend just a little more time figuring out how to get out of the way.  By that, I mean what is it in our Church that is blocking others from experiencing Christ – things that we think to be central, important, or even vital?

I think this will vary in many places.  In some places the barrier will be a fetishizing of “welcome” over teaching long-shared sacramental practice.  In others, it will be the elevation of doctrine over the needs of real, breathing men and women.  In some places it will be an overbearing bureaucracy and in others an underdeveloped leadership.  In other words, the Church needs a balance brought only by the acknowledgment that we need our relationships, community, and one another as the Body more than we need to be right.  It is in those difficult places that we will be shown, again and again, that the Holy Spirit is continuing to move and call us to new life.

These weaknesses, these blind spots, are often the flip side of great gifts.  The tendency, however, is to lean into those gifts when times get rough rather than and to overcompensate in such a way that glaring weaknesses are suddenly exposed.  It is then that the strength becomes a source not only of strident self-righteousness but spiritual barrenness.  Thus the need for Real Absence – an ability to stand outside of ourselves and genuinely allow the Presence of Christ, needed and longed for, to fill the space we are so ardently trying to occupy.

We have to allow Christ to teach, to preach, to heal, to comfort, to challenge, and to know us in the deep ways that cause us to doubt, for a moment, that we know what is best or can control where we are going.  We have a penchant in this culture for false presence – for the selling and buying of identity so that anything deeper is obscured by a sallow opacity.  The giving up of this – this self-emptying – is at the heart of what a life that can be described as Christian ultimately is shaped by.

Sadly, this whole process is one that Episcopalians are sometimes a little uncomfortable with – conversion.  We spend a good bit of time affirming and even our calls for justice or reconciliation often feel more like attempts to make ourselves feel better about our own enlightenment rather than a real attempt to create change or promote something that doesn’t just mime justice but is actually just.  Conversion is that process by which we know ourselves no longer alone but in relationship with the Trinity.

Once we believe that this relationship is Present and Real – then we can only allow ourselves to be changed and drawn into something that looks more like the true exchange of the Trinity and less like the bartering of selves and desires that forms so much of our cultural milieu.  The only point at which conversion is possible is when we can believe firmly enough in the Real Presence that our only rational response is Real Absence by which we allow ourselves to be formed, shaped, and filled by the Holy in such a way that we realize that there can be no personal piety or private devotion.  Piety and devotion become not means by which we map individual holiness but the path to a deeper and lasting opening of the self that undoes the notion of the hermetically sealed holy life.

Devotion, worship, prayer, service, the study of Scripture, Confession, and more become the means by which a life has its fullness revealed in the encounter with Christ at Font, Cross, and Altar.  Our teaching as a Church and Body must always point toward the fundamental reality that is Father, Son, and Holy Spirit revealed across the ages.  The Church at her most vital is a Body that knows itself formed in the realities of the Trinity.  Revealed in this Truth is the ideal for human nature, that we too are welcomed by Christ to call God Father, that we share in the gifts of the Spirit, that we are Sisters and Brothers.  This is where the Church might need to get out of the way a little bit – to practice Absence – so that the many longing for something more can see and know it by our willingness to be something less as Real Presence is felt and known.

2 thoughts on “Of Experimental Masses, Real Absence, and Conversion”