Recently a local group asked for a clergy person to be part of a discussion of a play that is being performed next week. I enjoy the theatre a great deal – I get a chance to be amongst my own people – all dressed in black with carefully disheveled hair – it’s like a homecoming of sorts.

The play is Catastrophe by Samuel Beckett which is best pronounced with a French accent – but since any French I attempt sounds like Inspector Clouseau at best and, at worst, a little field mouse that makes it across an ocean to find true love – plain English it will be.

In the play, An autocratic Director and his Assistant put the “‘final touches to the last scene’ of some kind of dramatic presentation”, which consists entirely of a man standing still onstage.

The Assistant has arranged the man as she has seen fit, atop a black block, draped in a hospital “dressing gown.”

The bulk of the drama consists of the Director moulding, shaping, contorting the man on stage to suit his own vision.

The Director is an irritable and impatient man. He is obsessed with the appearance of his production and demands that his coat and hat be removed leaving the man shivering in his hospital gown.

He has the man’s fists unclenched and then joined, arranging and re-arranging them.

Finally, they rehearse lighting with the theatre technician (the never-seen “Luke”). The play-within-a-play lasts only a few seconds: from darkness, to a ray of light falling on the man’s head and then darkness again.

The Director exclaims: “There’s our catastrophe! In the bag” and asks for one last run through before he has to leave.

He imagines the rising of the expectant applause on the opening day (“Terrific! He’ll have them on their feet. I can hear it from here”). The man has become, “a living statue portraying, from the director’s point of view, the quiescent, unprotesting and ideal citizen of a totalitarian regime.”

However, in an act of defiance, the man, the Protagonist, looks up into the audience (after having been looking down the entire time); and the “applause falters and dies.”

In that moment of simple defiance, He becomes a triumphant martyr rather than a sacrificial victim … his gaze and stoicism communicating a fierce strength and self-possession – the light has awakened him.

The light strikes the man and the forces that contort, bind, manipulate, and dehumanize him are thrown back – his personhood is made inviolate in that moment.

For Christians there are parallels that abound in the story. When the Director says “There’s our catastrophe! It’s in the bag” – the audience applauds, believing the story is at an end. 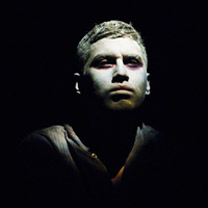 They are shocked when the Protagonist suddenly moves – they realize they have been clapping with and for the oppressors. Think of Palm Sunday – when we will say, together, “Crucify Him!” Recognizing only too plainly our own complicity and guilt in the suffering of Christ.

Yet there is a light that shines out from the darkness, in the play, it is Luke that gives new life and hope. That light releases the true being of the man even as he is being put on display, mocked, and derided for the crowd’s amusement.

The title of the play, Catastrophe, has multiple meanings.

In the Greek tragic sense, it is an action bringing ruin and pain on stage.

It also means an overturning – a complete reversal or inversion.

Another definition is “a complete failure; a fiasco.” And a final is a sudden violent change; a cataclysm.

This is the story we are about to enter as the Body of Christ in Passiontide and Holy Week is a catastrophe of epic proportions.

Ruin and pain are be on display for all the world to see. The cross will mark a complete failure of Jesus’ ministry – a fiasco. Yet this fiasco will be suddenly reversed and upended as our very being as the Body undergoes a violent change – the cataclysm of the Resurrection.

We sit in darkness and await the true light which comes to show forth the fullness of human nature and hope. Our selves and souls and bodies undergo a catastrophic change as the light of Easter breaks upon us and our fragile entirety is upended in the immensity of Christ as we are bound by the Spirit to the only true God.

This Christian life will not be one of ease. No people signed with a cross can expect as much – ease and comfort are part of the world’s sales pitch. Our Lord’s call is simpler, more direct, and more catastrophic – come and die.

Even as we are called to die to sin and be reborn the entirety of Creation is changed as well – our relationship with God, with others, with time, and with all of Creation is undone and remade.

There are forces, people, times, things, desires, fears, and so much more that twist and contort our very selves and our sense of who we are much like the director does on that stage. The Devil makes use of our foibles and insecurities to draw us, bit by bit, fear by fear, rejection by rejection, dashed hope by dashed hope, into loathing (of self and others) and, finally, into unbelief.

Whether it is grief, hubris, greed, or apathy – the world’s values lead to a painful and shallow place in which our only hope is that there are others lower than us.

For as our own needs can never be met by what the world has to offer, we content ourselves with the false comfort that others’ needs are not being met as well – that seems fair to us – and becomes the means by which we know we are “winning.”

We become the playthings of others and others to us as we grasp for a shallow, fleeting glory.

St Irenaeus is quoted as saying, “The glory of God is man fully alive, and the life of man is the vision of God.” God revels in our flourishing and we, in turn, are fully alive when we see and know the presence of Christ in us and in those around us – when we are taken with the vision of God.

When we measure ourselves by the standards of the world alone then we will always be reduced, eventually, to the lowest common denominator. The world’s standards are too base and too cruel for they judge by how we accrue and manipulate.

Using the standards of the world – we too quickly fall prey to the false comfort of applauding with the crowd. To love this life and this world is to lose the true life Christ promises.

Christ announces that the powers, principalities, and standards of this world are overturned by his sacrifice as “the ruler of this world” is cast out.The standard we have, the standard by which we measure our lives, is a higher one than the world’s. It is a divine one. A perfect one. A crucified one. It is one that withstands the sundry and manifold changes of the world and fixes our hearts where true joys are to be found.

The miracle of our sacramental life, is that we do not have to live up to a standard but to live into our true being – a being offered in the catastrophic reworking of our very nature and of all Creation.

The Baptismal covenant is more than the imparting of a new code by which we ought to live –though it is that. Baptism is the welcoming into the life that is now ours – Jesus Christ’s.

We do not have to prove our worth because we are one with the living Christ whose worth is beyond all measure. Our Lord is not simply Alpha and Omega – beginning and end – he is our present, our fullness, and our being.

As we prepare to enter Passiontide and Holy Week, we are reminded again of our story as the Body of Christ. We are united with his own suffering and rejection. We are there in the upper room, in the garden, and at the foot of the cross. And we are there watching, waiting, hoping, and rejoicing in catastrophic joy of Resurrection life.