I hope that readers will pardon any excessive sentimentality or moroseness! I assure you that this too shall pass. Joy cometh in the morning. R+

I visited General Seminary today and was immediately struck by just how much of a shock it was for me to see the West Building boarded off as it makes its transition from oldest building on the seminary Close to high end condo building. Other parts of the Seminary, such as the apartments across the street, are also going through the same transition. General no longer felt like General as I walked up and down the length of the Close.

This is not to say that the change is all bad. The new Keller library looks fantastic. The classrooms in Seabury Hall are modern and bright. There are bathrooms from the 20th century on the Close now.

Still, as I sat in the new Hobart room, I could not help but feel as if I were in a place I no longer recognized. The pieces were there but none were in the right place. I even recognized the paintings on the wall from various other places around the Close. 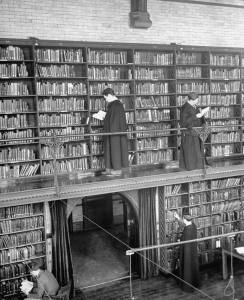 No students will hang out on the roof of the Maoist architectural experiment that was Sherrill Hall with a cigar and scotch, watch the lights of the Empire State Building in the autumn air, and label all manner of things modalist, modernist, or some dreadful combination in between.

Like so many things the place was a product of countless moments. It was map quiz liturgies, Solemn Evensong, class pranks, St Patrick’s Breastplate, the Hogwartsesque refectory, Fr Wright’s corrections and reproofs, Dick Corney’s cram-packed blackboard, early mornings in the sacristy, late nights in the oratory, the Barbie Dream Chapel, and more. Each person will have a General that is theirs and, when they return, it will ever be no longer there.

Yet the heart of the place – the Chapel of the Good Shepherd is there – with bells still clanging and calling students, faculty, and staff to pray together.  You always know what the heart of General is – even as so much around it changes the chapel serves to always remind one that you are at General because it is there that its life as a community is formed, refined, expressed, and made alive.  You know you are there, at GTS, when you are in the chapel.

In the future, I am sure others will bemoan that General is no longer General because some other this or that is no longer there.  Yet, God willing, they will have that chapel to talk about.  They will know they are talking of the same place because that space will have shaped, formed, and nurtured them.  It will still be calling faithful people to prayer.

I suppose I was feeling more sensitive to issues of time and place because in between wonderful meetings with potential curates for Ascension House I was engaged in an online conversation about Communion without Baptism. The whole conversation left me with the same sense of profound displacement. As I read of Eastern Oregon’s resolution coming to General Convention and heard of a similar resolution being proposed for Connecticut, I could only think that it seems that the Church I took for granted is no longer there – and may never have been.

I have said, when people ask me about General, that I loved the “idea” of General Seminary perhaps more than its actuality. There was a certain charm and resistance to the changes and chances of the world that marked it as a place set apart even as it sought to engage the needs of the changing world and church. Its quirkiness appealed to me deeply – moreso than its execution of its day to day operations ever could!

Perhaps, I am discovering, I fell in love with an “idea” of the Episcopal Church.

Just as when I went to General, finding the Episcopal Church was a joy and it felt exactly like where I was called to be. I felt at home and it was a place that made sense because there was a there there.

I am not sure where the there is now.

As I talk to priests too happy to ignore rubrics and ordination vows to conform to the doctrine, discipline, and worship of the Church because they have decided their sense of “welcome” is more important than the church’s call to common identity,

as I attended a Diocesan Convention at which we sang treacly hymns with narcissistic lyrics,

as I talk to priests in pitch battles in their dioceses about baptizing in the name of the Trinity,

as I attend Eucharists where priests make up the Eucharistic Prayer on the spot (“meal of power” not Body and Blood and “the systems of the world are broken” at the Fraction),

and as I watch the Church one more time hurtle into a divisive squabble, I am feeling profoundly out of place.

The “debate” over Communion without Baptism is opening, for me, a sense of cognitive and spiritual dissonance. It is one part of a broader shift. There are wonderful churches that do manifold things differently than the Episcopal Church. You can make up Eucharistic prayers, communicate anyone who walks through the door, and baptize in the name of whatsoever contortion you wish to make of the Trinity, you can do all of that in other traditions, churches, and faith communities.

My question for people who wish all of these things is “Why this Church?” Why choose this tradition when those things are available free of charge and canonical responsibility in other places? I would suggest that we are having difficulties as an Episcopal Church because we are, in too many ways and places, forgetting how to be Episcopalians.

I came to the Episcopal Church because I found a home that valued dignity, was steeped in history, and believed the Sacraments did something. My first parish home was a large Rite I parish which was filled with young people similarly drawn. There I found people who were called to life in Christ through a worship and sense of place that called them beyond themselves – to strive for faith – rather than asking little and changing no one.

I realize that perhaps I joined my idea of the Episcopal Church rather than its actuality.

Even, at Christ Church, as we engage in mission efforts, young adult ministry, and seek to deepen our participation in the life of Christ in the Church, I am aware that it is now feeling more and more like a rearguard action as I watch the very Church we are working so hard to form young people for drift further and further away from its core identity.

I see signs of real hope – our diocese has helped us undertake new mission work in the Hill neighborhood at Ascension. The young people that are part of Saint Hilda’s House are faithful, passionate, and care deeply about the world around them. Here, at Christ Church, we are living into a fulsome blend of Catholic tradition and full engagement with the world around us. I have wonderful conversations with new clergy partners and potential curates for Ascension.

Yet those moments are feeling increasingly rare and precious.

There are boundaries within which one says “that is x.” In the past, we have used the Prayer Book to do just that. We have said, this is what we believe. Yet we are not only redefining “x,” we are deciding “x” is irrelevant. We no longer desire to have any sense of boundary, discipline, or conformity. Those things which mark us as a community and a people of faith are being undone with incredible rapidity. Over and over, I hear the language of the narcissistic world that wants its way right away creeping into the language of the Church.

What heart will be left? As we reconfigure the definition of sainthood, dismantle the Sacramental tradition we have been handed from the first Christian communities, ignore the Prayer Book, second guess canons on a parish by parish and priest by priest basis, and so much more, what heart will be left to the place?

When I first came to the Episcopal Church, I felt like a pauper given a key to a treasure room – everywhere I looked was something I could have only imagine owning – and yet it was now, by grace, mine to care for, share, and pass on.

Too often now though, I feel like I am watching those very treasures sold off as here for a day and gone tomorrow furnishings are tried out – jumped on and slouched into like a knockabout futon. The sad thing is we are not buying anything very new – it’s as if we’ve walked into a 1968 Futons-R-Us store and said, “I’ll take whatever dated, period-specific, scratch-and-dent, discolored thing you have!”

I can only hope enough others too have found, valued, and long to hold onto and pass on some of the inheritance before we are left with far too many faded pieces and no longer recognize the place around us.

26 thoughts on “A Church’s Identity: A Visit to General Seminary with Thoughts on Modern Disputations, Controversies, and Sundry Matters Ecclesial”